By Robert Fulford
Rome
Burrowing through the records of Renaissance churches a few years ago, a scholar came upon a striking fact: in the year 1516, the Brancacci Chapel in Florence burned half a barrel of oil every day, just to keep its votive lamps flickering. The oil of course produced soot, which floated upwards and coated the art on the walls. Multiply that half-barrel by the days of the year, multiply again by the number of years this practice was followed (say, 400), then factor in the wax from candles lit by individual worshippers.

When you think of it that way, there's no reason to wonder why Renaissance art looks pretty gloomy in its original settings. The miracle is that we can see it at all. This also helps explain why fine-art restoration is a major profession in Italy. Art scholars are explorers who travel deep into the encrusted artistic past, their way charted by "infrared telethermos-reflectographic examination." All going well, they come back with a painting transformed, looking as it did when new. Restorers are slowly creating a new and more vivid Renaissance.

An English scholar, John Pope-Hennessy, wrote once that "great art is immutable." Pope-Hennessy was brilliant, but wrong. Far from being immutable, great art constantly changes. First, we alter it by the way we endless rearrange the past, moving artists up or down the quality scale. Vermeer provides the perfect example: we find it impossible to believe he was ignored for two centuries, but he was. And art objects themselves never stop changing--flaking, drying up, cracking, or eroding under the everyday chemicals in modern air. Art moves all the time, just like the continents.

All that oil burning in the Brancacci Chapel darkened Tommaso Masaccio's "Adam and Eve: The Expulsion," a crucial fresco that helped push art from Gothic to Renaissance. It depicts Adam and Eve as pitiful, shattered figures, their shame and despair making them humanly vulnerable in a way that was new to art. Masaccio, the shining star of 1420s Florence, never lived to see his 28th birthday but nevertheless made history. Artistically, he was a son of Giotto and a father to Michelangelo. 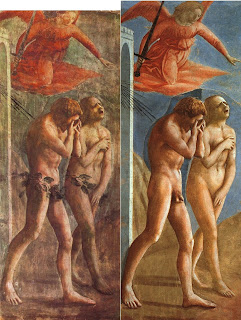 Tomasso Masaccio, "Expulsion of Adam and Eve", 1426-28,
Capella Brancacci, Santa Maria del Carmine, Florence
(Left: before restoration / Right: after restoration)
He showed Adam and Eve nude, but about three centuries later leaves and branches were painted over their genitals, an outrage probably perpetrated by the dirty-minded Cosimo de' Medici III, duke of Tuscany from 1670 to 1723, who considered nudity disgusting. Meanwhile, oil and candle wax were building a crust over the surface--despite many attempts at cleaning, including one (in the 1770s) that made things worse with a chemical that further discoloured the painting.

But in the 1980s a major restoration magnificently illuminated this corner of the Renaissance. Suddenly the colours were brilliant again, and Adam and Eve nude once more. A great painting became greater, people who know Renaissance art had to revise one of their mental images, and every book about Masaccio became obsolete.

The restoration of Michelangelo's paintings in the Sistine Chapel in Rome, often called the restoration of the century, has had a similar effect, magnified by the fame of both artist and work. John Osborne, a University of Victoria art scholar, suggested in the Queen's Quarterly that every book on Michelangelo would now have to be rewritten because the Sistine Chapel results, "both unexpected and astounding," revealed that he was a brilliant colourist. 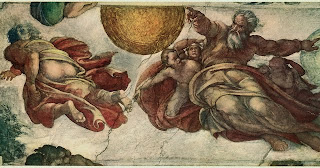 Michelangelo, The creation of the Sun, Moon and Plants, 1511, Sistine Chapel
(Up: Before restoration / Down: after restoration)

As I sat in the Sistine Chapel recently, admiring this transformation, it occurred to me that the restoration's results may be even more radical than Osborne suggested. Certainly the colour is a great surprise, even if you've studied the reproductions: the yellows are higher, the greens brighter, the pinks softer and more nuanced. The colours now have a modern tone: some of the blues wouldn't be out of place in a Matisse and there are greens that would suit a Gianni Versace dress. The messages in the Sistine Chapel seem familiar and emotionally understandable to a modern sensibility, in a way that they didn't before. More remarkably, the restoration shows Michelangelo clearly trying to give pleasure through colour. There's a powerful strain of hedonism at work here, a thought that might not have occurred to someone studying the old, grime-encrusted Sistine. 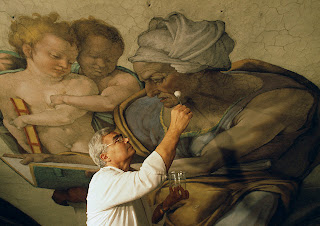 Professor Gianluigi Colalucci is in charge of the restoration
work of Rome's Sistine Chapel. (foto: Corbis®)
The restorers did everything they could to surround their work with an air of academic legitimacy. They discussed every detail of the project in public, and in mid-restoration they stopped for an international conference on whether they should continue. They were so scrupulous that the restoration job took 13 years, more than twice as long as Michelangelo spent making the paintings. Still, there are those who aren't sure it was a good idea to make such a radical revision to the Michelangelo we all used to know. And there are scholars still who insist that we are no closer to the "real" Michelangelo than we were 20 years ago. On the Internet the other day I noticed an American college course, "The Sistine Chapel: still Michelangelo?"

Certainly he's a Michelangelo for this moment in history, which may be inevitable. Perhaps restorers are influenced, like everyone else, by the spirit of the times; perhaps they find what they look for. The history of art is a great novel that each generation rewrites for its own purposes.
(Originally published in February 11th, 1997)
Published by María Magdalena Ziegler en 2:10 PM