By Victoria Hopper
Polykleitos, Ancient Greek sculptor of the Doryphoros and creator of the Canon and the contrapposto, is considered one of the great masters of classical Greek art. 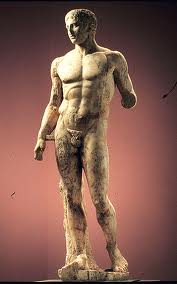 Polykleitos, Doryphoros, IVth Century B.C.
Polykleitos was an ancient Greek sculptor working during the mid to late 5th century BC. His work has been admired throughout history for his original approach to beauty, proportion and form, and he is considered one of the great masters of the classical world. The two main features of his work are the concentration he pays to proportion (the ‘Canon’) and composition (the contrapposto). His statues are usually nude, choosing to explore the feel and movement of flesh and muscle rather than drapery. One of his most famous and influential statues was the bronze Doryphoros, or Spear Bearer, of which only later copies remain. 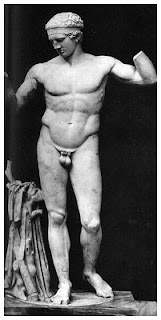 Polykleitos, Diadumenos, IVth Century B.C.
Polykleitos’ Canon
Polykleitos was interested in the ‘rules’ of beauty, in creating perfection of beauty through mathematical precision. He developed a theory of proportions, which he called ‘the Canon’, creating a statue of the same name to demonstrate his theory.
Unlike the ancient Egyptian method of laying out a grid onto the material and mapping on where all the features should ideally be placed, Polykleitos’ method was more flexible. In his Canon, the human form is made up of separate definable parts that are all related and mathematically proportional to each other. This allows for greater variation of posture, resulting in a less rigid, more dynamic composition. No matter what position his figures are arranged into, or how arms and legs are arranged, the whole always appears perfectly balanced.
Unfortunately, neither the statue nor the theory remain to us. Our information comes mainly from other literary sources, such as this extract from the writing of the second century AD medical writer Galen:
“… the proportion of one finger to another, of all the fingers to the rest of the hand, of the rest of the hand to the wrist, and of these to the forearm, and of the forearm to the whole arm, and, in short, of everything to everything else, just as described in the Canon of Polykleitos.” (De Placitis Hippocratis et Platonis, V.448)
Polykleitan Contrapposto
Contrapposto is the term given to a stance in which the figure appears to slouch slightly, resting their weight on one leg. The hips therefore slant in an opposite direction to the shoulders. Though the figure is at rest, a sense of movement is still captured in the shift of weight from one leg to the other. This creates the effect of a natural, relaxed posture that avoids being too stiff or rigid. 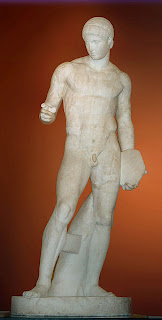 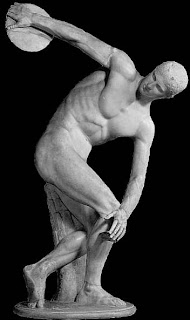 Left: Polykleitos, Diskophoros / Right: Myron, Diskobolus
The slant of the shoulders in relation to the hips is an important element of Polykleitos’ works. If the torso does not appear to respond properly to the movement of the legs, the statue will look awkward or disconnected. This can be seen in earlier Greek works such as Myron’s Diskobolos, (Discus Thrower), not to be confused with Polykleitos’ Discophoros (Discus Bearer). In the Diskobolos, the legs are tensed as the figure crouches. The torso, however, remains stiff; the movement and tension of the legs does not appear to carry through into the chest and arms. Polykleitos used the contrapposto to avoid this disconnection between lower and upper half by creating a sense of movement that is carried through the whole body.
The opposite slant of hips and shoulders also creates an ‘S’ curve that runs through the centre of the body, breaking the symmetry between the two halves of the body that older statues rigidly maintained. Though symmetry is abandoned, the ‘S’ curve created by the contrapposto still gives the statue a sense of balance and pattern.
Influences of Polykleitos and his Doryphoros
Polykleitos’ influence on later works cannot be overstated, especially amongst Roman and Renaissance artists. Perhaps the most famous example is the colossal statue of David by Michelangelo, 1502-4, now housed in the Accademia in Florence, influenced by Polykleitos’ Spear Bearer.
Sources
Spivey, Nigel. (1997) Greek Art. London: Phaidon.
Woodford, Susan. (1986) An Introduction to Greek Art. London: Duckworth.
[Originally published on suite101.com / Copyrights belong to the author, 2010]